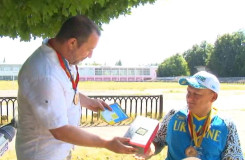 Being among the first men who were mobilized, Vasilii Gorelyi joined an operational detachment directly involved in the anti-terrorist operation.

The 32nd checkpoint located in Lugansk region near the village Smeloie, was called the “outermost” situated at a distance of 10 km from major Ukrainian military forces. This part of the front was marked by a high concentration of militants, enemy artillery and tanks in the fall of 2014. In late September – early October the 32nd checkpoint was blocked by Cossacks, who constantly attacked it from mortars and small arms. Then the militants blocked the road with their checkpoints completely encircling the 32nd checkpoint and mining all the nearby roads.

The road to the 32nd checkpoint was called “the road of death”. At least 15 Ukrainian soldiers were killed on the way to the checkpoint, whereas military hardware losses amounted to at least 8 units.

The checkpoint garrison consisted mostly of the National Guard servicemen of just over 100 people. Unlike separatists, the checkpoint defenders didn’t have any heavy weapons having only small arms and armored personnel carriers.

The crew of the BTR-4E, consisting of the commander Vasilii Gorelyi, Konstantin Trotsenko (driver mechanic, from Pavlograd) and Alexandr Chernenko (arrow-gunner from Seredino-Bud district), risked their lives breaking through the encirclement and managing to take seriously wounded soldiers from the surrounded 32nd checkpoint.

Vasilii Gorelyi’s armored vehicle was the only one to break out of the ring. On its way to the 29th checkpoint the crew picked up two more wounded soldiers. Later it turned out that all of them survived. All the wounded soldiers will forever owe their lives to the crew of BTR-4E – Vasilii Gorelyi, Konstantin Trotsenko and Alexandr Chernenko.

Being a chemist in civilian life making active pharmaceutical ingredients, Vasilii Gorelyi proved to be a hero in a difficult situation for the country. According to the Presidential Decree he and his crew were awarded with the military medal “For courage” of the III degree.

It should also be noted that shortly after the law on mobilization was published the general director of “PHARMHIM” LTD Viktor Liashenko at a staff meeting promised to retain jobs for all mobilized employees regardless of the time spent in military service. He kept his word. Eighteen out of nineteen mobilized employees returned to the company, whereas one employee got enlisted into the army by contract.